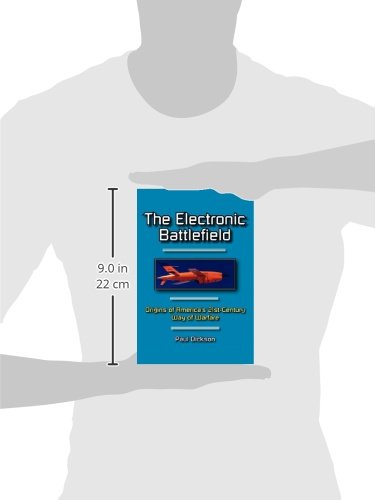 
Expected to be delivered to Germany by Christmas. Description Today's American Military is the most technologically advanced fighting force in the history of the world. Drone aircraft spy on-and attack, and destroy-designated targets, acting on commands from half a world away. Remote-control warfare has come into the world, forcing our society to face endless new questions, from the morality of doing battle without risk, to the emotional debate over whether drone operators can distinguish a band of terrorists from a group assembling for a wedding.

And the drones are merely the most dramatic and visible example of astonishing, unstoppable, technological advance in the military. Battlefield sensors and satellite imagery provide a flood of information to commanders. Computers themselves have become targets-and weapons. How did it get that way? How and when were the decisions made, the weapons created, the strategies and tactics chosen that brought us to this point?

In this classic account, Paul Dickson takes us back to the waning days of the Vietnam conflict, and the earliest days of "push-button war"-and the startling story of the birth of The Electronic Battlefield. Product details Format Paperback pages Dimensions Start With Why Simon Sinek.

Bloomberg - Are you a robot?

Add to basket. The Art of War Sun Tzu. Day of the Rangers Leigh Neville. War on Peace Ronan Farrow. The Art of War Tzu Sun. Destined for War Graham Allison. Command and Valour Stuart Robertson. Berlin Antony Beevor. Yet despite the importance of this crucial resource, America's grip on the spectrum has never been more tenuous. Insurgencies and rogue nations cannot hope to match our multibillion-dollar expenditures on aircraft carriers and stealth bombers, but they are increasingly able to afford the devices necessary to wage spectrum warfare, which are becoming cheaper and more powerful at the same exponential pace as all electronics.

Communications jammers are abundant on global markets or can be assembled from scratch using power amplifiers and other off-the-shelf components. And GPS spoofers, with the potential to disrupt everything from navigation to drones, are simple to construct for anyone with a modicum of engineering expertise. Stateless actors aren't the only—or even most troubling—challenge to America's spectrum dominance.

The greater an opponent's size and wealth, the more electromagnetic trouble it can cause. A nation like China, for example, has the capability to stage elaborate electronic assaults that could result in nightmare scenarios on the battlefield: radios that abruptly fall silent in the thick of combat, drones that plummet from the sky, smart bombs that can't find their targets. The US may very well never engage in a head-to-head shooting war in the Far East, but the ability to effectively control the spectrum is already becoming a new type of arms race, one that is just as volatile as the ICBM race during the Cold War—and one that can have just as big an impact on global diplomacy.

The American military is scrambling to develop new tools and techniques that will help it preserve its electromagnetic edge. But that edge continues to shrink by the day, and very soon our inability to completely control the spectrum might result in a different kind of war. Any old crow will gladly tell you that spectrum warfare is nothing new. The men and women who go by that avian moniker, which derives from a World War II codename, are veterans of the American military's decades-old efforts to attack and defend the electromagnetic domain.

Their secretive trade dates back to the Russo-Japanese War: While facing an impending naval bombardment in , a Russian telegraph operator used his spark-gap transmitter to jam the radio of a Japanese ship that was orchestrating the assault. Though this electronic gamesmanship worked wonders—the Japanese were unable to complete their bombardment—the czar's military brain trust failed to learn from the experience. The following year at the Battle of Tsushima, Russian admiral Zinovy Rozhestvensky foolishly declined to jam his opponent's radios, allegedly because he didn't trust that his own transmitters would work.

The Japanese, whose ships were outfitted with the latest Marconi wireless equipment, used their communications superiority to outmaneuver and destroy the majority of Russia's Baltic Fleet. Four decades later, during World War II, the advent of radar spurred both Axis and Allied powers to invent ways to cloak the true natures of their aerial exploits. One of the most famous innovations was Moonshine, a British system that absorbed, amplified, and then echoed German radar waves, so that a group of just a few planes could mimic an armada of hundreds.

When the Cold War commenced, the US focused on refining and improving these early methods of electronic bamboozlement. During the latter stages of the Korean War, for example, American B bombers were outfitted with primitive jammers that befuddled the radar on antiaircraft guns.

And starting in , Navy jets in Vietnam were equipped with torpedo-shaped jamming pods that knocked out early-warning systems with torrents of electronic noise. Clearly in agreement with that prognostication, the US Air Force spent a good chunk of the Reagan era developing the EFA Raven, an electronic jamming plane that would play a key role in shutting down Iraq's radar stations during the early hours of Operation Desert Storm.

But after that emphatic victory, the American military lost interest in the Old Crows' geeky specialty. This was due partly to a vogue for stealth technology: Since aircraft like the B-2 bomber were designed to evade radar by virtue of their sleek shapes, jamming equipment seemed superfluous. But the Pentagon also failed to foresee just how much the new millennium's wireless revolution would alter warfare—by making unmanned vehicles pervasive and giving asymmetric forces new means to coordinate and execute attacks. The folly of this strategic myopia became apparent soon after the invasion of Iraq.

Insurgents quickly mastered the art of constructing radio-controlled IEDs, which they set off with a range of common gadgets—cell phones, of course, but also more basic devices such as garage-door openers and toy-car remotes. The Army lacked the technical expertise to prevent the insurgents from using the spectrum, so it turned to the Navy and Air Force for assistance.

But those branches hadn't done enough to update their spectrum-warfare capabilities over the preceding decade. Their jammers were designed to affect large-scale radar installations, not the narrow slivers of spectrum used by civilians. And much of this equipment was ancient: The Navy's preeminent jamming pod, the ALQ, had debuted in the early s and was plagued by reliability problems related to its age.

The ALQ will remain the state of the art in the Navy's arsenal until at least , when it's scheduled to be replaced by the yet-to-be-built Next Generation Jammer. When the Army finally began to equip its armored vehicles with hacked-together jammers, a new set of problems arose. The systems' antennas blasted out radio waves with such reckless abandon that plenty of friendly communications links got zapped in the process—a problem that the military terms "signal fratricide.